As I have said before as a Gospel Doctrine teacher, I am subject to random thoughts that run through my head. As a nonfiction writer, I always find myself wondering about the editing process. Since I do not consider the Book of Mormon fiction, these thoughts run riot in my head each time I begin to wonder why did Mormon put this in, and perhaps more importantly, what did he leave out? Lesson 29 was one of those moments where I wondered did he purposely leave some things out? Basically this is where Alma (the younger) talks to his children Helaman, Shiblon, and Corinaton.

If you read you will discover that Helaman got a lot of information including specific details about Alma's experience with the angel. He also got direct instructions on how to handle the plates with an interesting admission that Alma is not sure why these instructions are given, but it is something the Lord will deal with some time down the road. Of course, we have the privilege of knowing why. He also told Helaman which information should not be shared...words and concepts limited to and coming from Satan. Helaman was his leadership child. His follower son Shiblon got much less. I love you, you are doing great, stay with your brother Helaman, etc. Now his advice to his wayward child crosses over to Lesson 30 which I will be teaching this Sunday. The words and concepts to each child were different but somewhat similar. Alma's best advice to all his sons was to learn of, study deeply, and understand fully the Atonement. For Helaman, the Atonement was about reaching his potential as a spiritual giant, which of course we know he becomes; for Shiblon, to continue in the wise path he was already going; for Corinaton, to repent and move forward spiritually.

What I got to thinking is Mormon edited this treasure we call the Book of Mormon. (And a treasure trove it is.) So did Alma in fact have more to say to Shiblon? Was it a repeat of what Alma had already told Helaman? Does the good follower of which there are many, say Sam to Nephi, or the brothers Lehi and Nephi, get the least amount of advice because they are on the right path, will probably stay on the right path, but will be better as examples? Short of interviewing Mormon (or Alma) I doubt my curiosity will be satisfied any time soon. But it did give me a deeper appreciation for Mormon's editing. I think I would like to explore that monumental task Mormon set for himself along with everything else he was doing at the time. I wonder if Alma spoke directly to Mormon or did Mormon have to solely rely on the plates. It is a higher manner of editing isn't it? Why would we not apply the same principles to our own efforts at editing? Bring us to a higher level of editing. I'm on a mission now to discover how to edit Mormon style. 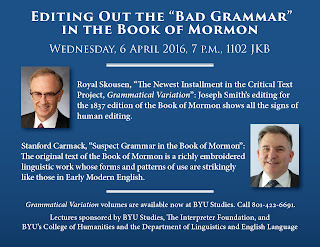