Do the Actual Words Matter?

When I am reading, I often wonder why an author used a specific word. Why that word? When it fits like a glove, I think well done; when it really does not work, I think what were you thinking. So I thought I would show an example or two of what I mean.

The Preamble to the Constitution originally reads thus:

We the People of the United States, in Order to form a more perfect Union, establish Justice, insure domestic Tranquility, provide for the common defence, promote the general Welfare, and secure the Blessings of Liberty to ourselves and our Posterity, do ordain and establish this Constitution for the United States of America.

We are Americans and in order to form a government, we have to establish laws and court system, peace within other countries, attack when other people defy us, provide a government and economic system to make people satisfied, and to secure freedom. We have established the Constitution of the United States.

The citizens of the U.S.A. in order to make a better country create fair laws, make sure our country is at peace, providing military defense, make everyone happier, to have ourselves and future generations in this country be free, and legally make this Constitution for the U.S.A.

How about another country's take on a preamble like say India:

WE, THE PEOPLE OF INDIA, having solemnly resolved to constitute India into a SOVEREIGN, SOCIALIST, SECULAR ,DEMOCRATIC, REPUBLIC and to secure to all its citizens:JUSTICE, social, economic and political; LIBERTY of thought, expression, belief, faith and worship; EQUALITY of status and of opportunity; and to promote among them all FRATERNITY assuring the dignity of the individual and the unity and integrity of the Nation; IN OUR CONSTITUENT ASSEMBLY this twenty-sixth day of November, 1949, do HEREBY ADOPT, ENACT AND GIVE TO OURSELVES THIS CONSTITUTION. 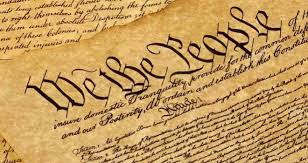