We Are in Mourning LOL

Losing a football game defines you more than winning. So many people seem to think Alabama fans are arrogant. I see us as excited and confident. No matter. In the end being gracious win or lose defines your character. Learning what you did wrong and right or accepting the winds of fate ie referees is all part of the process.

A rejection of our work defines our writer character. Many years ago I wrote a book about what I thought was a unique perspective on race relations. The first and admittedly only publishing company did not reject me out of hand, but offered what I thought was weird advice. Obviously they had not read my summary and first three chapters because he assumed I was a run of the mill southerner making apologies. I put my book away and gave up. What he told me convinced me the conventional wisdom on southerners and race will always be defined by a certain narrative...you are either an apologist or a racist. The confirmation hearings on my Senator Jeff Sessions only tells me it hasn't yet changed. Losing (or rather rejection of my proposal) defined my perception. I choose to live my written convictions rather than write about them. Perhaps that is what Heavenly Father would prefer any way.

That said let me congratulate my Crimson Tide on a perfect season ending in a in a game lost only in the last 6 seconds. Well done. 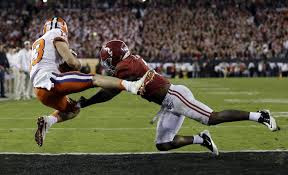