My Hollywood attractive nephew's first child, a boy, had his first birthday last Saturday. Since they live quite a ways away we had to skip the actual birthday party. But the parents wanted a very unique and fun birthday gift idea...a time capsule. We all write a letter to him to be opened on his 18th birthday. My parents loved the idea since by the time he's 18, they will be watching from the other side...so they say. Probably true. It started a firestorm of ideas. And we each have come up with our own perspectives.

My dad dusted off a ring he received from Lockheed Aircraft for 2,000 hours of combat duty in Vietnam. He had it polished, and engraved. On one side he listed his squadron numbers and on the other the dates he was in Vietnam. On the inside of the ring he inscribed "pro liberatiat partra" or Latin for "my country's freedom." I'm not sure how an 18 year old young fella will appreciate the ring at 18, but he will surely like the rolled up 100-dollar bill. Later, I'm sure he will cherish the ring.

In dad's letter, he followed my lead and wrote of his 18th birthday. He was in the Air Force stationed at Goose Bay Labrador in Canada. It was 20 below. He was part of the aircraft crash group as top nozzle guy so not only was it cold and dark, he was on top of the fire truck where it was windy. The crew was waiting on a plane that reported an engine fire. Dad said the aurora borealis was particularly bright that night, and he was awed at God's handiwork. Several jumping-jacks later the plane appeared, engine fire out. So the long cold wait was for nothing, which in this case was a good thing. No cake, no ice cream, no presents, no acknowledgement.

My mother is going to write about my stepfather, since this child is named after my dad and stepdad. My sister has written a rather long letter about the Plan of Salvation and her testimony of the gospel. This particular part of our family is not LDS. I would love to be a fly on the wall when an 18 year old reads that. Me, I came up with the idea of writing about your 18 birthday. I was a freshman at Alabama, living in a dorm room, celebrating with friends. I think my dad's story beats all of ours. Would love to know what my stepdad was doing at 18. Wonderful gift idea. Hope I'm around to watch him open the time capsule. 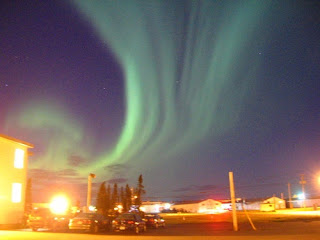 BTW this is the RCAF Goose Bay Labrador Northern Lights
Posted by Terri Wagner at 7:52:00 AM
Labels: Terri Wagner