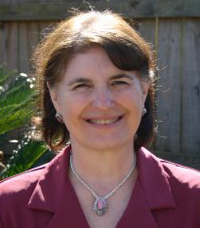 Being a biological aunt or an honorary one is eye opening. Parents (and friends that have been parents) are always fussing at me because the only rule at my house is get along to have fun. I will not tolerate anything less. I think it came from my own childhood. We all (hopefully) have that relative that just loves us unconditionally. I was lucky enough to have more than one. Anything...I mean anything...I wanted my grandmother tried to get for me. When she died way too soon from cancer all five of her grandchldren believed we were her favorite. She was that good at making us all feel that special. I treasured every moment. In the midst of a terrible situation, she came to my rescue when I needed it the most. I will never forget how she made me feel. When she died, her spirit touched mine and said goodbye I love you. And at times I am reminded she still loves me from across the veil. But she was not the only one who cared that way.

In a different but completely unconditional way, I had an aunt who accepted me as I was not one word about what I needed to be, should be, was going to be, just as I was, at whatever stage in life I was. She was so good at it, I went to her many times for questions I was not comfortable asking my parents. Not once did she ever act shocked or disappointed or judgmental about my question. It is hard to believe she was an alcoholic of the worst sort. It changed her badly and deeply and her children have a different memory of her.

When the unthinkable happened, and I ended up not having children, I found myself "just the aunt." And because my family was fractured, we all lived in different places, with different lives, and were not especially close. That has changed I am thrilled to say. My first foray into aunthood was when my BFF had her first child followed by 8 others. I adored her children and was allowed to be their "aunt." I discovered something about myself, she allowed to happen naturally. I was a pushover in the pattern of my grandmother and aunt. Love them unconditionally, answer whatever questions they had without editorializing, and plan fun. Sometimes it was as simple and inexpensive as throwing rocks in a pond, sometimes as grand as trips to Busch Gardens. As I grew older, and had friends with children, I had many more opportunities to be aunt.

Then my sister moved in with her two boys. What a delight. My life went from 30s single to step in parent overnight, and I loved it. It helped that my friends embraced my nephews as well. Now I could lavish all that love on my "own" set of nephews. We had fun. We had unconditional love. And yes we had major spoiling. Then came a chance to do so with my brother's children, and now his grandchildren. I don't try to be grandma, or mom, just the aunt you want to hang out with.

However, there is great criticism from certain sources who must not be named. At first those criticisms hurt and made me question my approach to aunthood. I mean after all it's a big hard world out there, was I really helping them? In the end I decided, I was the "just the aunt." And everyone needed what I had, that relative that just loves you as you are where you are. I don't try to force myself on the family, I back off when dad or mom are in parent vortex mode, I work hard at just being a sideline go-to person.

Recently I came under fire again, and the person I least expected to stick up for me, did. I was told she advised my critic that's who she is, that's her philosophy on being an aunt, and really who are we to say it's unhealthy to give children too much love and acceptance? She does not have them long enough to really spoil them. My kids grew up under her spoiling and both of them still remember it (and still get it) now. I was wrong, let her love them her way. 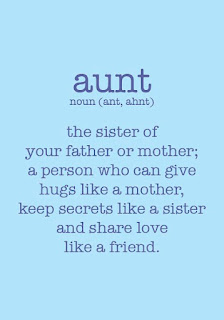