Anger and Rage From a Writer's Perspective 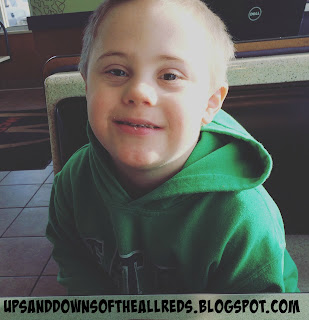 For those of you who don't know, I have a son with Down syndrome. I've been blogging about him  from the moment I discovered he'd have Trisomy 21. I've discussed Jacob-related miracles, stories from the three months he's spent in the hospital, his open-heart surgery, and numerous milestones that make up his life. As a result, I probably love Jacob more fiercely than my other children because I've had to fight so hard to keep him in our family.

In addition to blogging, Jacob has his own Instagram Account so I can share him with others also touched by people with disabilities. Not only can I share and rejoice with family and loved ones who had a hand in Jake's development, but there are people whose lives are similar to mine. Together, we rejoice in the triumphs, mourn the lows, and pray for miracles as needed.

Today, I experience my first troll on Jacob's account.

Last week Jacob's big sister had a pirate themed birthday party. So, I took a picture of Jake with a patch over his eye, looking fierce. The caption was, "Arrrr! I'm a pirate!" and posted it on his Instagram account along with a couple of Down syndrome related hashtags.

The troll, someone who doesn't follow my account, then proceeded to say something nasty about Jacob, and tag one of his friends to come look at Jake's picture.

In that split second, when I realized what had happened, my blood boiled, ears burned, jaw pulsed, stomach roiled, and heart surged with adrenaline. My fists balled into fists and lips pursed into a tight line. I'm pretty sure I may have suppressed a growl too.  This was an honest-to-goodness fight-or-flight reflex, and Mamma Bear was ready to rumble.

I resisted the urge to hunt that troll to the ends of the earth and inflict unimaginable amounts of misery on them. How dare they say such mean and hurtful things about a child who cannot stand up for himself.  Instead, I blocked the troll and immediately made Jacob's Instagram private.

It's been decades since I've felt rage. I hope never to feel it again. But, should I have a character in one of my stories who needs to show and feel rage, I now have first hand documentation of what that emotion feels like.