Several months ago, I was invited to share a booth with a friend at Phoenix ComiCon. I went back and forth before I decided to give it a go. Now there are four of us authors in the booth.

ComiCon begins Thursday, May 25, and runs through Sunday, May 28.

I'm not positive whether or not I'm a good fit for the event. I write Westerns. ComiCon celebrates popular culture, particularly in the fields of SciFi & Fantasy. But before Firefly, there were Westerns, right?

If nothing else, I can take the expenses off my income taxes in several categories, including Advertising and Fees.

Although ComiCon is not strictly a book event, authors do participate, in both booths and at "Artist Alley" tables. For me, this will be an adventure in marketing, putting my author brand out there, conquering fear and anxiety, and trying to be an extrovert for four days.

I've been working on what books to take, how many copies of each book, how to display the books, how to decorate the booth, and other details. I've sent a ton of questions to my friend, read the policies of the show innumerable times (and I'm sure I missed something!), and even had nightmares.

Yes, nightmares. Horrible, vivid nightmares of having my car stolen from downtown Phoenix, thus stranding me 150 miles from home. Once I got my parking secured, though, the nightmares went away.

The last couple of days, I've been working on handouts. One handout showcases my major series, "The Owen Family Saga," and the other has a headline of "WESTERNS, America's Timeless Fiction," with photos of nine of my works, plus fifteen QR code links to various sites on the reverse.

I also made a ring-bound set of cards with large QR codes for those who wish to go purchase ebooks on the spot. Or just look at one of the books at Amazon. 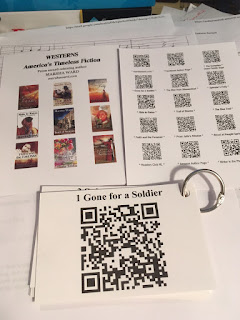 Why all the QR codes?

In view of the demographic of the attendees, I've decided to take a minimum amount of paperback books, because this crowd is more likely to buy and read ebooks. I'm attempting to make it easy for them to purchase books of mine that catch their interest!

There are tons of apps for reading/scanning QR codes. I'm hoping many attendees will have such scanning apps.

So much goes on at ComiCon that I probably won't be sitting around watching my feet swell as I thought at first. I might get to go roam a little to take in a panel, or just wander around and see the sights. I'm sure there will be cringe-worthy costumes, but some are likely to be spectacular--even if I don't know what show or comic book character they represent. 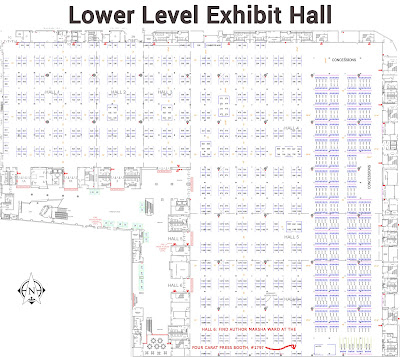