There are some things I know

I have always been so careful to say "I think" "I suspect" "I am 99% sure" rarely do I say "I know." Mostly I say I believe. Those two phrases have such different meanings. And I have particularly been careful in using "I believe" vs "I know" in my testimony of Christ (and His church). Mostly because as a historian, I realize that much of what we "know" is as Paul implied only true from a certain perspective. It has taken me many twists and turns to find that ultimate place God wants me (and all of us) to be. For lack of a better term, I simply call it living in the light. Some time ago, I was asked why I felt spiritually I was at a standstill. I related that I mostly thought of crossing up and over to a higher plane of understanding was like a door I was often brought to but never stepped through. I struggled to explain why I never would or could step through it. On some unconscious level, I feared it would require too much of me.

I don't know about many of you, but loving others has never come easy for me. I care, I serve, but really feel a deep down love....not so much. And I suspect God knew that. My childhood was military, and while that brings awesome opportunities, it also brings a sense of isolation. No one is really there long term but family; and no place is ever really home. And when my parents divorced, it only emphasized for me that I had no home. And one of the terrible consequences to the divorce was a feeling of aloneness I have never really gotten over....until now.

I was challenged by a very good friend to walk through the door and see what happened. It at once both electrifying and terrifying. I am so glad I went ahead and walked through the door and into the light. My whole world has opened up in ways I never thought I could comprehend. I really feel like a kid on a new adventure.

The very first thing that surprised me was the connection I now feel to my fellow earth travelers and to the earth itself. I always cared and served, but now I truly love. I hope this feeling never goes away. I feel connected in a way I have never felt before and eager to help everyone on their journey, where ever they are and where ever they may be traveling. And for me the best part is I don't have to worry about judging people. That's Heavenly Father's job. We live in a world where nearly every thing goes except being religious. Instead of concentrating on how "they" treat us, I am working on "how" I need to treat every fellow human being. 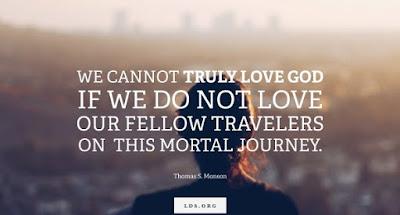