Once upon a time, I used to dress up on October 31 and wander around my neighborhood getting candy. I usually went with a group and had a blast, the homemade treats were as tasty as the bought candy. Each house tried out do its neighbor in the scary but fun aspect of Halloween. I graduated from princess to pirate to Star Wars characters as my Halloween celebrations went from trick-n-treat to dances and parties. I had fun no matter what I did. I looked forward to being the house that dressed itself up, and handed out the flavor of the year treat.

In the words of a Tim Burton movie, "something went terribly wrong." Halloween became well weird. People started calling it Fall Festival...which just is not the same. People began x-raying candy, candy dispensing centers became the norm, think mall, and the age and time and date to trick or treat got complicated. What happened?

Did Satanists hijack Halloween like the Fall Festivalsayers claim? Did the inconvenience of a weekday Halloween just become too hard to set up? Did parties and adult tricks become the norm? Did the horror (think gross out) films take the fun from the holiday? It makes me sad.

I hope the tide changes or the pendulum swings back or whatever it takes to make it a fun kids holiday again. My favorite costume as a kid...hands down the pirate. I mean I got a sword! As a young adult, dressing up like an Ewok and singing Halloween carols to the bishop/stake presidencies at their homes, as an older adult, hands down opening the door to the cutest kids with the biggest smiles and handing out a treat.

The church's trunk and treat comes close to what I used to know. Let's take the holiday back.

My trunk and treat cuties...the mermaid and the rock star. 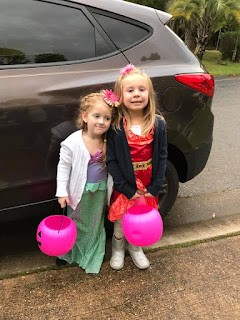