When Is It Time?

I have been blessed with the best dogs ever! Each one has brought a joy and delight to me that is truly indescribable. And I take pleasure in knowing through the gospel I will be reunited with the animals that gave such joy to me. I sincerely hope I can communicate better with them because some times I just don't know.

Several years ago, I had lost my Golden Belle. She died far too young to me although she was 10. A friend called up and said I hate to ask you this but would you consider taking my children's yellow lab? She's less than two and my ex is divorcing wife two and will have to move into an apartment. My kids want Kota to go to a good home.

What could I say?! So the ex brought this beautiful golden looking lab to my office one afternoon. She seemed sad like she knew something was up. And he seemed heartbroken, that did not gell with what I had been told about his actions toward and in truth there some funny ways that took her years to work through. One was as a simple as she was terrified to come through a slightly ajar door. It literally took me years and it still makes me smile when she bangs on through the door these days.

She sat in the back of my car so sorrowfully. Once I got her home, she and my then-half husky half lab danced around each other in silence, then accepted the new situation.

Cassie left me too early too and it was just Kota for a while until another friend had another lab mix in need of a home. This lab Daisy and Kota are the same age. They adore each other. But Kota has arthritis very badly whereas Daisy is just noticeably less fast than before.

For some time I have been sneaking Daisy out of the house for walks since Kota really cannot any more. But last night she just seem to beg me to take her. So I modified the walk to the back field and let her take her time and rest a lot. It wasn't even a football field worth of a walk. But later on she paid the price for her walk, and I had to give her a stronger pain pill.

So when do you look into those trusting loving eyes and say to yourself it's time. If she could talk would she tell me? Dad wants me to do it this time. I am going to see how she is today, but I am afraid she is more ready than I am ready to let her go over the rainbow bridge 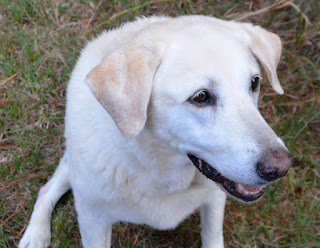