How Writing Can Be Cathartic 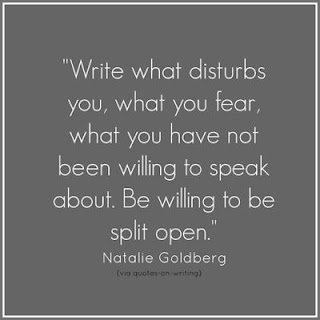 It's been four years since my father died. He passed exactly eleven months after my mother. Though the doctors blame Gangrene and Diabetes, I know it's from a broken heart.

For Mom, I cried once for three or four minutes. After that, I was done.

I never cried for my father. Not as I watched the light fade from his eyes, or when they carted his lifeless body out of the house, or at his funeral.  I wasn't even teary-eyed.

For a while I felt guilty for having no emotion.  My father was a hard man to love, but he was still my father. Wasn't that enough? Apparently my mind didn't think so.

In my heart, I've known for years that Define Normal needed to be written. But I opted to let other projects take precedence, pushing it further down my to-do list.

Finally, this winter, my sisters and I decided it was time to write. The sisters decided since I was the writer (insert laughter here), I would spearhead the project.  My only stipulation was that all stories would be funny. I didn't want Debbie Downer vignettes. Define Normal was designed to heal, not re-open wounds from our past. The Crazy Cady Sisters were created.

We began writing, each of us tasked with turning out one story (3-4 pages) per week, and 1 blog post every two weeks.  At first, we reminisced about growing up together, discovering different perspectives about our family and parents based off our 20-year age gap, and added new memories to the old.  We Skyped twice a month, and most of it was spent rolling with laughter and wiping our eyes.

Friendships were re-kindled, and sisterhood was strengthened. We were well on our way to having something to pitch in September at the ANWA Conference.

However, last night, I was reading a sister's blog post, preparing to add it to our Twitter feed.  The blog discussed all the things our father did for our family of ten children.  As I read the exhaustive list, I cried.  Not delicate trickles down the cheek, but giant crocodile tears, snot running out of my nose, and hiccuping sobs.  Years of resentment, anger and sadness escaped.

I mourned the loss of my father while cursing my ignorance and selfishness. I hadn't noticed his struggles to make our family fun, filled with laughter, and to raise hard-working, hard loving, independently minded children.  I cried over my unwillingness to see, and the many chances I missed to tell him I loved him. I sobbed over his big heart. And my small mind.

When I finished wiping my eyes, I knew the tears were a result of our book. We had written the thoughts in our hearts. Some, we already knew. Other emotions were discovered after they settled onto our pages. All of it will be forever etched in black and white for the world, and our other siblings to see.

In the end, I hope our family will draw closer to one another. If we cannot, at least I know how much my father loved me and each of my siblings. Now, after all of these years, I can properly mourn him.