I had a moment

This past week I got to spend time with my nephew and his wife who are expecting their first child. My sister is psyched to be a grandma for the first time. Thanks to modern blood tests, we should know next week the sex. You don't have to wait for that ultrasound anymore. When planning our trip for New Carlisle, Ohio, my sister discovered that only three-and-a-half hours away was Kirtland. I resisted her plans to go. For some odd reason, I have no desire to see church historical sites. But our trip was scheduled during her birthday, and I felt an obligation to go. When I prayed about, still silently grumbling, the Lord said, you will have a moment there, go. So off we went.

We first went to the historic Kirtland site where the church has the Newel K. Whitney store, the mill that produced the wood that built the Kirtland temple, the home the Whitneys built and allowed Joseph and Emma to live in. The room where the school of the prophets was held. The Issac Morley farm was also nearby and the missionary couple there were so interesting I decided I wanted to learn more about Brother Morley and his utter devotion to the newly restored gospel.

No moment yet! As most of you know, the Kirtland Temple is owned by the Community of Christ the former Reorganized Church. You pay to tour the temple, and they ask for donations to keep up the temple. Our tour guide was a young woman from Independence Missouri who was terrific.

You first watch a film showing how the temple was made which of course follows the LDS version until after the saints leave Nauvoo and eventually the Community of Christ buys it and restores it as much as is possible. The film ends, the curtains open and there is a stunning view of the temple and grounds. Then we walked over to the building itself. Our guide tells us each part that is original and what is not. We toured the second floor first and then the bottom floor. So far no moment.

Then she told us about how they worshiped in the temple following LDS beliefs and then asked if there was a pianist and a music director. Since we were all LDS of course there was. And we all knew the first verse of "The Spirit of God." We started singing and there was my moment. I cannot adequately explain what happened. A friend called it an out-of-body experience. All I know is that I felt and "saw" that body of saints singing with us and yet I clearly heard us along with them. It was glorious to connect so with those early saints. Their joy in the temple, the first in centuries, and their excitement about what the temple meant. I saw them, felt them, and at the same time felt our reverence for this first temple. Heavenly Father came through and gave me my moment. It rekindled my excitement over the gospel something I had lost for a while. Interesting side note: the Kirtland temple was originally more of a gray/blue color with a red roof and green doors. I kinda like knowing temples do not necessarily have to be white. 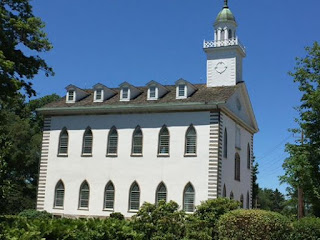