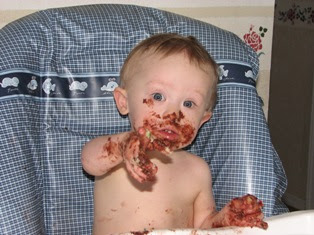 My baby turned two-years-old a few days ago. It's hard for me to believe that two years have passed since his birth. He thoroughly enjoyed his birthday cupcake, smearing it all over his face, arms, and chest (I was smart enough to remove his shirt before giving him his cupcake--at least I've learned something from raising 10 kids).

The next day, he kept me going from one end of the day to the other. He threw a pencil in the toilet and I had to fetch it. Thankfully, it wasn't a used toilet :). Next, he found one of the potted plants and turned it upside down. Since I had just watered the plant, a nice pool was created in the hallway and he promptly took a little swim in all the muddy water. He then went on to find some packing paper and rip it to shreds all over the floor, turn the trash can upside down, and pull all the pots out of the cupboard. He loves to sit in front of the oven and watch himself make faces and dance. He also likes to lick the oven door and leave little "love smears." To finish off the day, he tossed his spaghetti noodles on the floor. I didn't want them to dry and "glue" themselves to the floor so I began picking them up. As soon as I was within reach, he grabbed my hair and left a deposit of spaghetti sauce on the top of my head (okay, so maybe I haven't learned as much as I should've with 10 kids).

Typical two-year old stuff. While I don't love all the messes, I'm so grateful for them. I'm thankful each and every day that my son can make the messes and act like a two-year-old because I wasn't sure he ever would.

Shortly after his birth, he was diagnosed with Trisomy 21, commonly called Down syndrome. I was shocked because none of the prenatal ultrasounds indicated any abnormalities. My only familiarity with Down syndrome was that I'd seen people with it. With the diagnosis, I feared my son would be a blob in the corner and life would pass him by. I thought he'd never enjoy a "normal" life. I was alarmed at the pages and pages of medical conditions associated with Down syndrome that I found on the Internet. I was afraid that I'd spend most of my time in the hospital and wondered how I could possibly raise my other children. I not only had a lot of misinformation about Down syndrome, I also had many unfounded fears.

If I had known then what I know now, I wouldn't have worried for a moment. My son is anything but a blob. He interacts with all of the other kids, he plays games, he shows off, he has likes and dislikes, he loves music, he plays with toys, and none of us could imagine life without him.

Prejudice is usually born of fear and ignorance. We don't understand someone or something and we let our lack of knowledge dictate our attitudes. Some feel pity for me because I have a child with a lifelong genetic condition. Others just feel grateful that they don't have to have a child like mine. Attitudes born of ignorance. The truth is it's an honor and a privilege that Heavenly Father chose me out of all the other women in the world to be my son's mother. He is a gift and though he may take a little longer to do what others take for granted, he deserves as much respect and love as any other child. He should never be judged by his extra chromosome. He has talents and strengths like everyone else. No one knows what he may accomplish in this life and he deserves the opportunity to do and be whatever it is that he desires.

Some seem to be content to place a child with Down syndrome into a "box" and only expect certain things from that child. "He'll never do this." "She'll never be able to participate in that." I don't believe any child should have limitations set on him or her. What a disservice we do when we limit someone for any reason. A principal once told me in a PTA meeting that the children in our school would never read very well because the socioeconomic level was low and poor people don't read well. Huh? Talk about limiting a group of children. (For the record, many children at this same school read well above grade level, some even read 5 years or more above grade level).

I have no idea what the future holds. I don't know what struggles my son may experience or what prejudice he'll face simply because of his chromosome count. I only know that Heavenly Father has blessed me beyond measure with a child that will surely teach me more than I will ever teach him and I will continue to hope that people will see my son the same way that I do.
Posted by Rebecca Talley at 9:45:00 AM
Labels: Life, Relationships, Retired Bloggers, Spiritual Things