If your character is supposed to be moral, please keep his moral compass true. I got involved in a series (14 books long) where nearly all the major characters (there were actually several) changed their moral compasses often. In Dragons and Dungeons lingo, if you are neutral good, then you stay neutral good. Unless you evolve.

In this series, the characters did not evolve as much circumstances "caused" them to alter their morals for that situation. Then later confronted with a different circumstance, a character would go back to a high moral compass. Drove me nuts. So much so that I actually found a online blog that summarized each chapter of each book with comments. That's how I found out what happened without actually reading the books. Most of the comments offered up the exact same problems I had with the book. Kinda surprised me that I was not alone since the series is extremely popular in its genre. Best not to name names, LOL.

As an editor, I find myself telling an author, you have changed this character, they can't change back, are you sure you want to go down this road? I realize you want your character to evolve, and a good one was Harry Potter. He grew up, became a teenager, things got grayer until he found his own moral compass. I like stories where the hero/heroine find their moral compass. Starting out good, and turning bad is acceptable, because some people lose their way due to circumstances and become caught up in their shall we say evil ways. And turning from bad to good is fine. But going back and forth brings a dimension to the book that simply does not work, especially in certain genres.

Always keep in mind your end user...the reader. Make sure they are going to be happy with your characters' journey. Nothing makes or breaks a piece of fiction when the main character changes moral compasses the way some people change hair color, or clothes, or eye color, or...well I will not belabor the point.

Have you read a book where the moral compass changed too often to make it even believable? 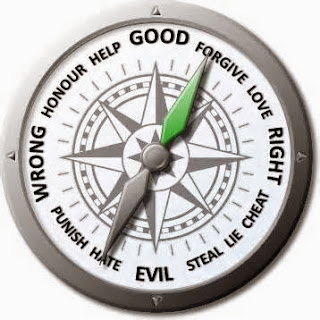