I Know You Remembered This Year!

Okay, this year there’s no excuse. I gave you fair warning last October and told you all to circle October 14 to celebrate….c’mon, you all remember! Don’t make me say it by myself. I know you haven’t forgotten! (It involves cake, so how could you?) Let’s shout it out all together now. October 14th is…Norman Conquest Day!

I knew you hadn’t forgotten! And in the very unlikely case that a few of you did (some of you are new to the ANWA blog, after all), the good news is, today is October 13th, so you still have a day to prepare.

If you don’t know about Norman Conquest Day, you can read my post about it from last year at http://anwafounder.blogspot.com/2007/10/tell-me-you-didnt-forget.html.

Once again, I prepared by buying another cake and once more decorating it wi 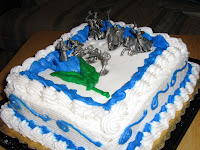 th knights from my pewter collection. This year, the blue rose symbolizes the hill near the town of Hastings where the native English Saxons took up their defensive position against the Norman invaders on October 14, 1066. The Normans utilized a relatively new military tactic—armed knights fighting on horseback, while the Saxons clung to their traditional “fighting on foot” strategy. You might think this would give the Normans an overwhelming advantage, but the Saxons held off the invaders for most of the day. In the end, it was not a charging knight, but a lowly Norman archer who successfully shot an arrow over the shields of the Saxons and killed the Saxon King Harold, more or less by sheer “good luck”. (Or “bad luck”, if you happened to be King Harold!) Hence, the “knights” standing on foot on my cake represent the Saxons, while the knights on horseback represent the Normans. Unfortunately, I don’t have an archer in my pewter collection. (Wel 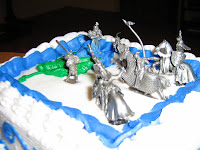 l, unless you count one of my centaurs, but I’m pretty sure there weren’t any centaurs at the Battle of Hastings, so he doesn’t get to come to my party.) And if the knights on my cake look a little blurry, just remember—it’s hard to snap a clear photo when knights are in motion, riding into battle! 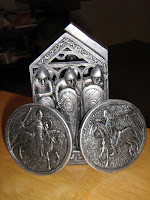 So come tomorrow, I’ll be sitting down to a nice piece of Norman Conquest Day Cake. And since cake simply cries out for a goblet of milk, I’ll also be using my Norman Soldier coasters to set my goblet on.


Why would I want to celebrate a battle where one nation (Normandy) invaded another (England)? Because for those of us with English heritage, we wouldn’t be who we are today had that invasion—or Conquest—not occurred. So to whatever Norman blood is running through my veins, I’ll be raising a goblet of milk tomorrow. And if you have English blood as well, then I invite you to take at least a moment to raise a cup (if you haven’t got a goblet) of milk to your Norman ancestors, as well!

(Okay, okay, so my Norman ancestors would probably have preferred a goblet of ale, but milk is what you get when your descendant turns out to be a Mormon Norman.)

You can read more about the Norman Conquest if you’d like on EyeWitnesss to History.com.
Posted by Joyce DiPastena at 11:31:00 AM
Labels: Life, Other Things, Retired Bloggers