In Clayton Christensen's book, The Power of Every Day Missionaries, he discusses boy prophets in the scriptures. The idea intrigued me. I have never doubted Joseph Smith. There is too much power in the words of his testimony. It permeates my being whenever I think of it or speak of it. Clayton Christensen talks about the Lord's pattern of choosing boy prophets because they are teachable. The concept makes perfect sense to me. Youth are eager to learn and grow.

So I found scriptural references for as many boy prophets as I could (some references are better than others.) I like doing stuff like this. Here's the list. Let me know if you find more. I'll add them to what I already have. And thanks for indulging me. :}

Enoch: Moses 6:31 Why is it that I have found favor in thy sight, and am but a lad, and all the people hate me; for I am slow of speech; wherefore am I thy servant? 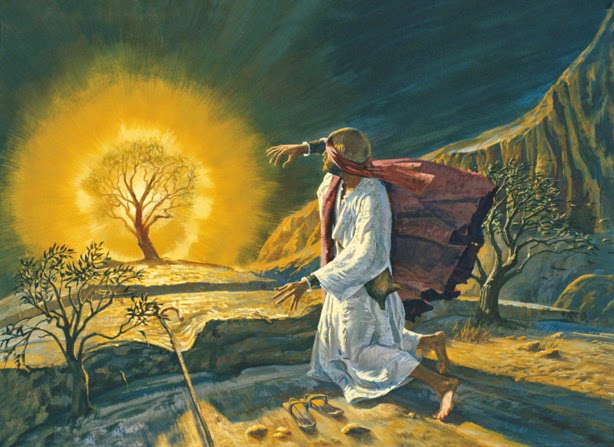 Moses: Exodus 3:2 And the angel of the lord appeared unto him in the flame of fire out of the midst of a bush.


Samuel: Samuel 1:26-28 For this child I prayed; and the LORD hath given me my petition which I asked of him.Therefore also I have lent him to the LORD; as long as he liveth he shall be lent to the LORD.  And he worshipped the LORD there.

Saul: 1 Samuel 9:2 And he had a son, whose name was Saul, a choice young man, and a goodly: and there was not among the children of Israel a goodlier person than he: from his shoulders and upward he was higher than any of the people.

David: 1 Samuel 16:11-13 There remaineth yet the youngest, and, behold, he keepeth the sheep.  And Samuel said unto Jesse, Send and fetch him: for we will not sit down till he come hither.
12  And he sent, and brought him in.  Now he was ruddy, and withal of a beautiful countenance, and goodly to look to.  And the LORD said, Arise, anoint him: for this is he.
13  Then Samuel took the horn of oil, and anointed him in the midst of his brethren: and the Spirit of the LORD came upon David from that day forward.  So Samuel rose up, and went to Ramah.

Amos: Amos 7:14 Then answered Amos, and said to Amaziah, I was no prophet, neither was I a prophet's son; but I was an herdman, and a gatherer of sycomore fruit:

Jeremiah: Jeremiah 1:4-5 Then the word of the LORD came unto me, saying,
5  Before I formed thee in the belly I knew thee; and before thou camest forth out of the womb I sanctified thee, and I ordained thee a prophet unto the nations. 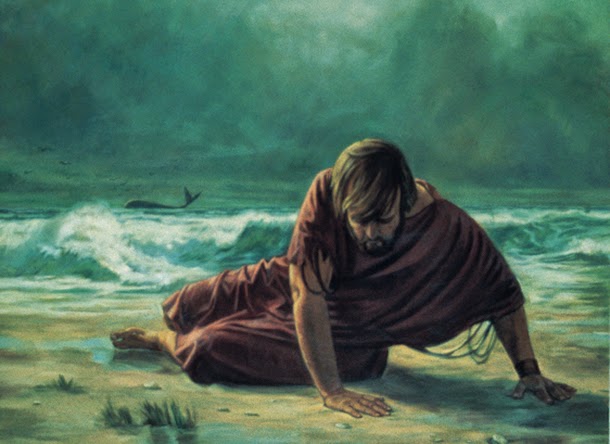 Jonah: Jonah 1:1-2 NOW the word of the LORD came unto Jonah the son of Amittai, saying,
Arise, go to Nineveh, that great city, and cry against it; for their wickedness is come up before me. 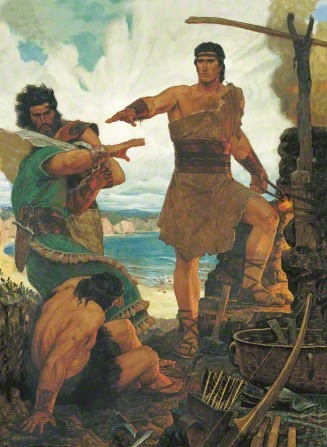 Nephi:1 Nephi 2:16 And it came to pass that I, Nephi, being exceedingly young, nevertheless being large in stature, and also having great desires to know of the mysteries of God, wherefore, I did cry unto the Lord; and behold he did visit me, and did soften my heart that I did believe all the words which had been spoken by my father; wherefore, I did not rebel against him like unto my brothers.

Enos: Enos:1-2 BEHOLD, it came to pass that I, Enos, knowing my father that he was a just man—for he taught me in his language, and also in the nurture and admonition of the Lord—and blessed be the name of my God for it—And I will tell you of the wrestle which I had before God, before I received a remission of my sins.

Alma the Younger and the Sons of Mosiah: Mosiah 27:10-13 And as I said unto you, as they were going about rebelling against God, behold, the angel of the Lord appeared unto them; and he descended as it were in a cloud; and he spake as it were with a voice of thunder, which caused the earth to shake upon which they stood; And so great was their astonishment, that they fell to the earth, and understood not the words which he spake unto them. Nevertheless he cried again, saying: Alma, arise and stand forth, for why persecutest thou the church of God?  For the Lord hath said: This is my church, and I will establish it; and nothing shall overthrow it, save it is the transgression of my people. 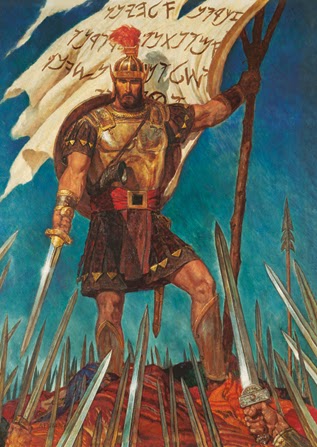 Captain Moroni: Alma 43:17 And Moroni took all the command, and the government of their wars.  And he was only twenty and five years old when he was appointed chief captain over the armies of the Nephites.


Mormon: Mormon 1:2  And about the time that Ammaron hid up the records unto the Lord, he came unto me, (I being about ten years of age, and I began to be learned somewhat after the manner of the learning of my people) and Ammaron said unto me: I perceive that thou art a sober child, and art quick to observe.

Maybe the reason this intrigues me so much now is because we are working with these young missionaries. They are so bright and wonderful and faithful and teachable. What a strong force for good they are in the world. What a privilege it is to be among them.

Posted by Christy Monson at 3:00:00 AM
Labels: Retired Bloggers