by Andilyn Jenkins (Included are several photos from shows I've been in over the years in no particular order. Enjoy.)

“Now, Andi, just because you’re getting married, doesn’t mean you have to stop acting. I see it happen to young girls all the time. Don’t squander your talent,” Gary, the technical director and my fellow cast member, told me seriously at the close of our show, my first at BYU–Idaho.

I had been in Rexburg for seven months. As a freshman, I landed a lead in the fall musical and met the man of my dreams. At the end of the show, my character announces she’s off to get engaged and then winks at the audience. I found Aaron in the front few rows and winked at him. 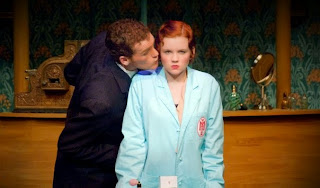 Then I went home for my semester off and planned a wedding. Three months later, Aaron and I were married in the Idaho Falls, ID temple and moved into our basement, one-bedroom apartment. I got a job I loved working at the Writing Center and momentarily put theater on hold to get serious about my new life and my English degree.

Eight months later, I still hadn’t ventured over to the Performing Arts section of campus. I couldn’t. I didn’t want to see Gary or any notices informing me about auditions I couldn’t make. I put theater on hold again. Aaron and I were excitedly talking babies, and I had my nose to the grindstone trying to square away my associate’s degree before she came. I still held my job at the Writing Center, worked hard in my classes, followed my carefully-laid-out plan, and nine months later had an associate’s degree and a baby girl. 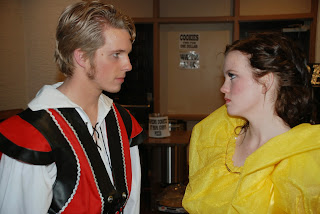 spring 2008 Gaston (Simon Nissen) and Belle (me) in Mountain View's Beauty and the Beast (because apparently my favorite pictures are ones where I'm ticked-off).

I was barely twenty.  It was winter in Rexburg, Idaho, and I had a newborn. All my momentum that had pushed me through wedding plans, moves, church callings, work, tests, and morning sickness ended here holding my beautiful baby girl. And with the time to stop moving, I looked behind and wondered where I had gone. “Momentarily” had become two years and I saw no end. I was taking one easy class that wouldn’t fail me for my week of maternity leave. I was forty pounds overweight and covered in stretch marks. My hair started thinning drastically (one of those great post-partum things no one tells you about). Breastfeeding sucked. And cabin fever overwhelmed me.  I felt like I had slipped through a crack and lost me. Not the old me. I was happy to let go of the eighteen-year-old who only worried about finals, boys, and food. But I didn’t know this new me; I hadn’t given her any thought.

I knew I was a wife and a mother—a spectacular one. I knew I wanted my bachelor’s degree in English because writing brought me clarity and joy. But I knew little else. I was unequipped with the tools to balance my more difficult personal wants with my responsibilities. I knew I was lucky to be a mother, so my depression for feeling “stuck” made me feel dirty and guilty. And my dreams to find my place on stage made me feel selfish. 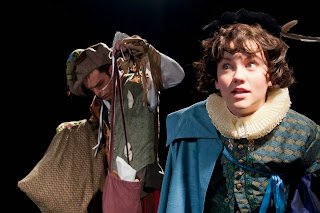 The turn came six months later with sunshine, a daily workout routine, and prayer. Spring semester was about to start with snow still on the ground, and I changed my minor from education to theater and signed up for my first acting class since high school. By the end of the semester I knew:  acting wasn’t my talent to be squandered. Acting fed my soul. 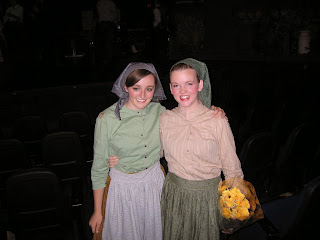 I went on to do three more productions at BYU–Idaho and tech’d one musical. One late night at the theater, I sat chatting with two of my professors as we checked the stage lights and programmed the board. Richard Clifford, the department head and lighting director for the show, remarked that with my longer, lighter hair and new last name, it took him a while to connect me to the freshman who played in the musical in 2008. I laughed and replied, “Well, when I had to stop listening to my Broadway playlists because I would spend the evening crying myself to sleep, my husband and I realized I needed to be back in this building.”

His expression softened, and he looked knowingly into my eyes, “Oh yeah. You’ve got it bad.” 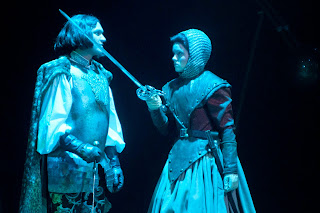 From those hard three-ish years of school, marriage, and motherhood, I took away four important lessons.

1. I am important—which means my dreams are important. I cannot give to my family when I don’t feed myself.

2. Time moves. There will always be times when I can fit acting into my life, and when those times come I just have to push with everything I’ve got. Then there will be times when it doesn’t fit, and those times do not last forever. So crank up the show-tunes because I now know I’ll find my way back.

3. I must want it enough. And I must have support. When I tech’d The Drowsy Chaperone, we hosted a talk-back. One girl raised her hand and asked, “I would love to be in a show, but I don’t have time. How do you fit it into your schedules?” And we all laughed. Because the reality was that none of us were “fitting” it nicely into our overloaded schedules like a 1,000-piece jigsaw puzzle. We were collages, desperately trying to layer one more colorful picture onto a crammed poster-board. But we all wanted it enough that we felt compelled to be there. And we all had support—spouses, roommates, parents—that picked up our slack at home and cheered us on. Without Aaron’s support, none of my dreams could be realities.

4. I can “grow where I’m planted,” a beautiful bit of advice from another professor at BYU–Idaho and owner of the Playmill Theater in West Yellowstone, Roger Merrill. The reality is that my family is my first and most important priority—which means, I probably won’t tour across the country for 6 months with Wicked. But I can plant myself in Mesa and make a difference here, whether that be by acting in local theater, doing the Mesa Easter Pageant, or volunteering to help with my old high school’s productions. 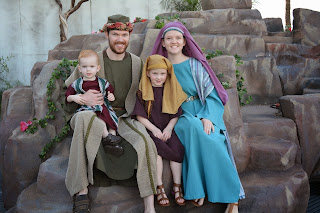 
I am constantly changing. I’m a different person now than I was when I left Mesa, when I got married, when I had Evelyn, when I graduated college, when I had Evan, and today. And hopefully, I’ll be different next month too. But in my life now, I am a wife and mother—a spectacular one. I am a writer, reader, blogger, poet, and technical editor. I am a procrastinator. I am a napper. I am a cookie-lover. I am a baker, cook, and house-keeper. I am a Young Women’s advisor. I am a gym member. I am a student of my own making—studying religion, politics, finance, teaching, couponing, nail art, hair braiding, cooking, and organizing. And I am an actress. Today, I was just a spectacular mother, cook, blogger, and cookie-lover. Hopefully tomorrow, I can wake up that house-keeper from her nap. And, fingers crossed, the actress’s curtain will soon rise.
Posted by Unknown at 1:44:00 AM
Labels: Learning, Life, Other Things, Retired Bloggers