Last week as I was outside waiting for my son's school bus, I looked over and noticed the start of a rose bush. It's a wispy little auburn branch, still in its infancy with only a few small leaves sprouting out of the stem. 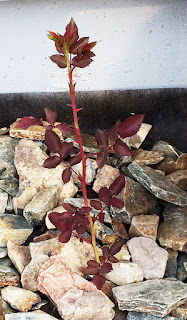 What makes this little wanna-be bush so fantastical is that I've tried to kill that darned thing three times already! I've never been partial to rose bushes. They're pretty to look at, and they smell wonderful, but I don't want them in my yard pricking me every time I need to prune them.

When we moved into our home nine years ago, I knew the rose bushes would have to go. I had one on each side of the front door, and on each side of our garage. The first time I pulled the bushes out, only three came back. And boy did they come back in force! They grew through the winter, and my guests were constantly getting stuck on random branches poking out from the bush like spastic arms going in every direction.

The second time, I pulled the bushes and transplanted them in my dying parent's yard where they could tend the blooms from their patio and watch them grow during their final spring and summer. The roses grew to be large and vibrant – a delight to my father who would use his feet to walk his wheelchair out to the edge of the patio and water the flowers every day. Two new rosebushes grew out of the gaping holes I'd left in the ground at my house.

Finally, this spring, as a Mother's Day gift, my husband and children yanked out the two stubborn bushes, filled in the holes, covered them with three layers of extra thick landscaping tarp, several hundred pounds of landscaping rock, and giant planters filled with lilies.

But alas, the little rosebush found a way around the obstacles and is growing in spite of their greatest efforts.

Every day since I discovered this mutinous little plant, I have smiled and wondered. Is this what we need to be like? Is this how Heavenly Father wants us to act when faced with terrible adversity in our lives, feeling as if we've been wounded to our core and cannot go on? Are we supposed to be strong and resilient like that stubborn little rose bush that doesn't realize it's supposed to die? But instead finds a way through the darkness, lifts itself up, and stands proud for the world to see and admire?


I decided today, as I passed by the rosebush that it had won. It had earned the right to stay in my yard, and I will just have to let it be. It's will is stronger than mine, and I hope that it will stand as a reminder that I should remember to live my life as strong as a rose.
Posted by Susan Cady Allred at 1:52:00 PM
Labels: Life, Spiritual Things, Susan Cady Allred