Sheesh! Talk about by the skin of my teeth. I only wrote this one week ago--but forgot to schedule it!
So, here I am again, a day late and a dollar short. . .
Not polished, but. . .take it for what it's worth.

By Susan Knight
FYI, I don’t support the CBLDF (Comic Book Legal Defense Fund) but I like this flag calligram. 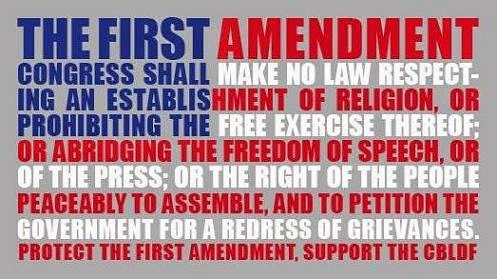 I spoke out about the Second Amendment to the Constitution at the beginning of this month of Independence. I think I shall write about the First Amendment this time around.


The phrase “separation of Church and State” has always given me heartburn because of the way people have turned it around. The First Amendment was not created to protect the State from religion, but to protect the right of We-the-People to practice our religion and not be dictated to by the State.


Most of the immigrants who crossed the ocean to come here, pre-Revolution, did so to escape religious persecution. If you lived in a State or Principality, in Germany say, in the 1500s to1800s, before it became one, big country, you had to belong to the state religion. In Germany, it was Lutheran. In England, it was the Anglican Church. In France, it was Roman Catholic (until the French Revolution), and in Scotland it was Presbyterian, and so on.


Even though religious freedom was a premise of the Constitution and its First Amendment,  these freedoms could not stop personal persecution. Unscrupulous people did lash out. The early Mormon church is a good example. Even William Penn was convicted of preaching a Quaker sermon which, at the time, was illegal, due to states rights.


Thomas Jefferson saw what was happening and spoke to We-the-People about a big wall of separation of church and state. He remembered what it was like being under the thumb of the English and having to do what the king said. He believed the state should not be able to enforce which religion to join or how one would practice their religion. The state could not "establish" a state religion. This phrase did not mean to prohibit religious beliefs or opinions, or to practice that which went against the laws of the land (the Ten Commandments). For instance, human sacrifice would be against the law of committing murder, so whichever religion practiced that would not be protected under the First Amendment.


Since that phrase, "separation of church and state" has been turned around in this modern world, We-the-People bought into the thinking that religion cannot be involved in anything pertaining to the State, or the government, as it’s now been contrived. People think they can’t pray in schools, or in public anywhere. But that’s exactly what the First Amendment protects—our right to pray in schools, or at City Hall, or to open a session of Congress or the Senate. The government cannot force us to pray, tell us what to pray, or have anything to do with us praying, but it cannot prohibit us from praying.


Any religious denomination has the right to meet in a school. Freedom of Assembly is also protected by the First Amendment. As long as the assembly is peaceful, it’s protected. Yes, seminary can be held in a high school. You might have to hold it before or after school, reserve a room, probably pay for the room, but you can hold it in a public school. I researched this when I taught early morning seminary in Pennsylvania. I opted to have it at my house, though. I lived across the street from one of the high schools in our ward.


Our country is based on Judeo-Christian thinking (not Buddhist, Hindi, Muslim, etc.). Our Ten Commandments form the basis for most of our government laws. If not, it wouldn’t be a crime to commit murder, or to steal. And it wasn’t too long ago it was a crime to commit adultery and adultery was grounds for divorce. Fines and sometimes imprisonment were the punishment. (Adultery is still illegal in twenty-one states.) These are the Judeo-Christian principles as outlined in the Ten Commandments. These beliefs are protected by the First Amendment.


So that’s my take on the Freedom of Religion part of the First Amendment of the Constitution. Do you know the other protections we have under the First Amendment? Take the quiz below and see how you do.
http://usatoday30.usatoday.com/news/nation/2011-06-29-first-amendment-quiz_n.htm


One of my favorite movies has a wonderful scene about the First Amendment. Even though it wasn’t specifically about Freedom of Religion, I thought I would include it. It gets me every time.
https://www.youtube.com/watch?v=8ecwKeU1_IU
Posted by Susan Knight at 9:57:00 PM
Labels: Learning, Life, Retired Bloggers