Is Your Main Character a Dummy? 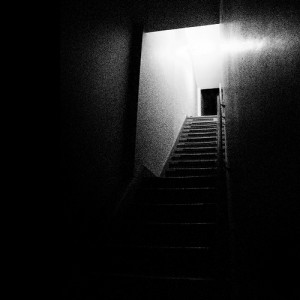 Or rather, does your MC make dumb decisions?

When I was 14 or 15, my brother and I were visiting my dad on Mandeville Island in California, where he lived and worked. My dad's house sat near the edge of the levee. A tiny wooden pier led out a few feet into the Delta, and on this foggy November day my younger brother and stood at the edge of the pier with our fishing poles. I cast my line, then a moment later jumped as far out as I could into the frigid water. As I spluttered and swam back to the pier, my clothes freezing and soaking, my brother stood at the edge with a shocked expression and called out, "What did you do that for?"

Now let's think for a moment on our reaction when we're watching a scary movie, and one of the characters is about to do something extremely stupid which will almost certainly result in his or her gruesome death. "Don't go down into the dark basement by yourself!" we scream. "The lights are out, you idiot! At least take a flashlight!" Even worse, they often announce their presence with a tremulous, "Hello?" Why do these people insist on making such a brainless move? Haven't they watched enough scary movies of their own?

In writing, your characters, or at least your main characters, should possess a few more brain cells than horror movie characters. Your readers are not going to be sympathetic to the MC's and care about them if they keep running around making stupid choices. Every decision should count, especially toward the end of the story when your character has hopefully grown and learned something. (An exception to this, says James N. Frey in his book How to Write a Damn Good Novel, is if you're writing comedy and your MC's dumb decisions are part of the plot.)

Sure, everyone makes mistakes or chooses to do something that creates a disaster, and this can be a great way to start the conflict of a story. Our main characters are human, too. But by the time your story takes off, your character should be making better decisions than randomly wandering off into the deep, dark woods trying to find what was making that chainsaw noise. Your readers will quickly lose their patience with such a person and start rolling their eyes more and more often. (I've read books with characters like that and have not picked up the sequels.)

So, if I were a character in a book, why would I randomly decide to leap, fully-clothed, into a river on a chilly winter day? That was a really dumb decision. Or was it? To my brother, it looked like I'd lost my mind. But as I cast my line out, I lost my balance and knew I was going to fall and there was no time to cry out to my brother to pull me back. The tide was out, and the levee underneath the dock was shored up by large, jagged blocks of concrete. If I'd fallen off the dock, I would have been badly hurt. So, in a split second, I decided the only way to avoid injury was to jump out over the levee and hope the water beyond was deep enough to absorb my fall. I think it was a pretty smart decision, and certainly a choice that added drama and tension to the moment. It also drove the story forward and created a whole new set of problems for me to deal with. I got wet, cold, and yes, I did get hurt, although no bones were broken and I lived.

Although, if I was really smart, I would have remembered how clumsy I was and not cast my line out from the very edge of the dock! But where's the story in that?
Posted by Kristin Baker at 6:00:00 AM
Labels: Retired Bloggers, Writing