How Many Facts About the Fourth Can You Find? 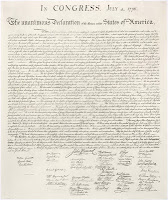 Just like Thanksgiving, my official day of blogging here at ANWA Founder and Friends falls on another national holiday. So, since I am a self-confessed trivia aficionado, I decided to blog a little about the Fourth of July.

Being from the Philadelphia area, Independence Day is near and dear to my heart. I also have at least a half-dozen ancestors, of whom I am proud, who fought in the Revolutionary War—one who fought with George Washington in all his campaigns. This adds to my fondness for the date. As an added bonus, two of my ancestors, sisters, married signers of the Declaration of Independence (which I discovered while researching during the July 4th holiday week some years ago).﻿﻿﻿﻿﻿﻿﻿﻿﻿

One of the most interesting pieces of July 4th trivia, I think, is that three U.S. presidents died on that day. You might have heard that John Adams (second president) and Thomas Jefferson (third president), best friends and arch enemies at different times of their lives, died on the day they made famous together—on the same day in 1826, hours apart. It was the fiftieth anniversary of the adoption of the declaration. (They died the dearest of friends, so, happy ending.) 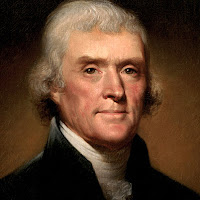 America actually declared its independence from England   July 2, 1776. John Adams wrote home to his beloved Abigail the next day and said the date, July 2nd, should from henceforth be celebrated with all sorts of pomp and circumstance. But, a few revisions were needed to the declaration document, so it wasn’t adopted until July 4th. Sorry, John . . . uh, Mr. President. John Adams spent his whole life celebrating July 2nd as Independence Day anyway, and, in protest, turned down speaking engagements offered him for July 4th events.
﻿﻿﻿﻿
﻿﻿John Hancock was the only one to sign the document on July 4th. He did a lot of sweating for a whole month, because it wasn’t until August 2nd that the other fifty-six signatures began to dribble in. The signers’ names were not published for another six months, in order to protect them. Announcing independence from Great Britain was an act of treason, punishable by death. (*gulp*) The biggest grievance—taxation without representation. ﻿﻿

﻿
﻿
Thomas McKean (who married one of my ancestor's nieces) was the last to sign in January 1777. Benjamin Franklin was the oldest signatory at the age of seventy.


The third president who gave up the ghost on the Fourth of July was James Madison (fifth president) in 1831. Calvin Coolidge (thirtieth president) was the only president born on July 4th, in 1872.

﻿﻿﻿﻿The declaration document, printed by a newspaper in Philadelphia, didn't hit the streets until July 6th. The Liberty Bell sounded from the tower of what was to become known as Independence Hall in Philadelphia on July 8, 1776, summoning its citizens to the first reading by a Colonel John Nixon.

Philadelphia, of course, celebrated the first anniversary of independence on July 4, 1777. Ships in the Delaware River harbor were decked out in red, white and blue buntings.


Massachusetts was the first state to declare the date a state holiday. But the date didn’t become a national holiday until 1870. By 1941, federal employees were given a paid day off. So don’t expect any mail today.


The Fourth of July is one of the few holidays that has not been moved to a Monday. I hope it never is. That would just be silly.
Posted by Susan Knight at 1:00:00 AM
Labels: Learning, Life, Other Things, Outstanding People, Retired Bloggers