Is the Nest Ever Empty? 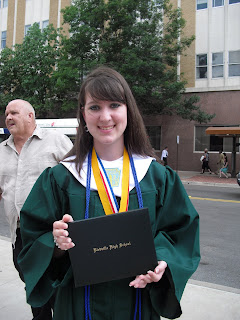 Sunday my youngest child graduated from high school. Here she is with her diploma.

After three graduations as a parent, and six as a teacher, I thought I knew exactly what to expect. I had a slight twinge because I remembered how fun it was to sit with the graduates. They were so excited. They were dying to do pranks, and I suggested harmless ones, like having one pants leg in the cowboy boots, and one out. This is Texas, after all!

So, I suggested this to a group of eager students before the ceremony. No one could tell they were doing this in a class of 410, but they felt like rebels.

So, the ceremony proceeded in the expected manner. Speeches, songs, more speeches, diplomas. I snapped photos like there was no tomorrow. I waited to listen for stray dinosaurs.

The class president stood at the podium and had the graduates turn their rings to the outside, then move their tassels from left to right. The tears rose in my eyes. My baby was leaving, as her brothers and sister had done. It felt like I was being laid off from a job I had for 28 years.

But real life intervened, and brought me back. My older daughter texted for advice, daughter-in-law called to tell me what great parents she thought my husband and I were, and younger son asked for words of wisdom about his girlfriend.

Turns out this job never stops. And that's a good thing.
Posted by Unknown at 6:00:00 AM
Labels: Life, Relationships, Retired Bloggers