If Jane Eyre fell in love with a rock star? 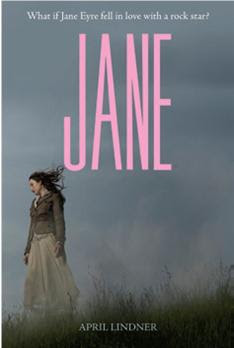 (image found here)
Jane, a book with a beautiful cover and a catchy hook:
What if Jane Austin fell in love with a rock star?
Wow!  What’s not to like about that.
Sold!
So, I bought the book and started reading it that night.
The book started like so many young adult books I read; parents recently died, girl is searching and starts on a new path in life.  Jane drops out of college and takes a job as a nanny for a famous rock star.
And here is where I start to have a problem with Jane.
She’s too perfect.
She’s not impressed by anything.
She doesn’t care what people think about her.
She doesn’t care how she looks.
She doesn’t let really important people give her a make-over.
She doesn’t want to travel.
She knows nothing about her famous employer because she’s not interested.
She doesn’t worry about her future, money or where life is taking her.
She doesn’t react.
And when she does react, the story is flat because remember, she isn’t trying to impress anyone and she doesn’t care what people think about her.
I really like the rock star, Nico Rathburn; how he is smitten with Jane and wants to have her around because his life is so full of people who are trying to use him or are smitten with him or want something from him.  Jane wants for nothing, just something warm to eat at the end of the day.
When Nico Rathburn, a famous millionaire gorgeous single rock star reaches out to Jane, she doesn’t react how I think she should.
She closes up, she shuts down, and she isn’t impressed.
Sure, she falls in love with him, but in a very controlled concise way.
And I just don’t get that.  It feels flat.
If I were Jane.
I would be so excited to be the nanny of a rock star.
I would be a wreck because my parents are dead.
I would try to look hot around the rock star.
I would dress to impress.
I would take advantage of all the amenities of working in a mansion.  I would jump on my bed, eat ice cream until midnight, swim in the gigantic pool, request a few amenities that would make my stay more comfortable and I would accept generous cash advances when my employer insisted I take them.
I wouldn’t sulk, turn down opportunities to travel and insist I do everything on my own dime.
Now, I realize author April Lindner is following the same plot as Jane Eyre, so I respect that.
But, I just wish Jane was a little more fun.
Case in point?  A great book cover and hook can sell a book.
But characters trying too hard to always be in control are boring.
Posted by Laura Lofgreen at 9:10:00 AM
Labels: Reading, Retired Bloggers, Writing