Don't mess with this mama

By Stacy Johnson
So, my sweet baby started sleeping through the night last week. I thought maybe it was a fluke, so I didn't get too excited and hoped it would continue. It did. Yeah me!!!
Unfortunately, there were extenuating circumstances.
I've dealt with this before. I'm thinking about a chapter in my parenting book that I call "Don't be the slave." This is where I talk about the things as parents that we sometimes fall slave to, like soothing devices. Of the eight children, only one took a binky. Vance. While it helped him be a really good baby, I was a slave to it. I would deter 20 miles on a trip just to find the nearest store to purchase a replacement binkie that disappeared between Mesa and Bloomfield. I still had to wake up in the middle of the night to search for it on the floor behind the crib, and who knows how much money I spent on those things. I remember him screaming bloody murder while I spent 15 minutes looking for it. You get my point. I swore then that I would not do that again.
Then came Katy, baby #5. Katy was so sick when she was a newborn and spent so much time in the Dr. office and hospital before the age of 2 months, that I swore I would give her whatever she wanted just so she would be happy. I let her have her thumb to soothe herself, and it was awesome. I never lost that thing, she slept throught the night, and traveling with her was a dream...until I was ready to break that habit. Luckily for me, when she was about three, I convinced her to do it herself and she did...for about 6 months. Then she started up again. So, I became a slave to the phrase "pull that thing out of your mouth" and waking up in the middle of the night to go to her room and make sure she hadn't taken the tape off her thumb. I tortured her with hot sauce and any other remedy I could find that would make the act of sticking that thumb in her mouth a negative experience. I did this for a few weeks and it was misery for both of us. The crying and whining, and magic tricks to be able to soothe herself were unbearable.
Fortunately, my friend had just purchased ThumbGuards for her daughter and swore by them as a treatment to break this bad habit. For the price of new wristbands (about $20), I was ready to devote the next 6 weeks to making sure this habit was gone for good...again. The first day, I noticed some slight blistering on her thumbs (I swear I disenfected them), so I made sure I cleaned them throughout the day and her thumbs too, even though it meant using a few extra wristbands in the process. After day three, her thumbs were so swollen and blistered, I decided that the ThumbGuards were not going to be a good idea, so I stopped. Lucky for me (not so lucky for her), she was so disgusted by the look and the sight of those thumbs (and the pain she was in), she stopped sucking her thumbs right then and there. Whew.
So you can imagine my horror when I see this...and I figured out why he has been sleeping so well lately. 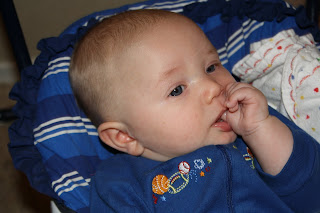 I will not be a slave again, that's all I have to say. 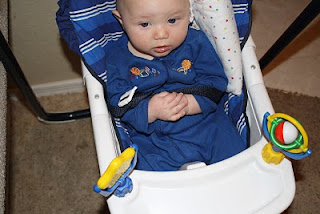 Trust me Buddy, it's better this way.
Posted by Stacy at 8:28:00 AM
Labels: Life, Relationships, Retired Bloggers, Writing