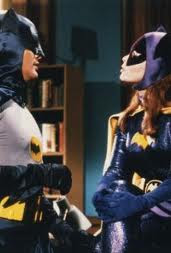 Batguy paced the length of Chief Simpleton's small office with the note he found under his batguy-mobile windshield wiper in his gloved hand, irritated as Batchick sat smugly on the desk staring at him. He read the smudged note again. The rain had made some of the ink run, like blue blood, down the wrinkled paper.

"Don't you know the answer?" Batchick asked, her voice cool, too cool for the heated question the one and only Quizzler left for Batguy to figure out. And figure it out, he must. The Quizzler was known for his proclivity of leaving clues to his next crime before he committed them, like he wanted to get caught--by him in particular.

Batguy spun around, his black almost-leather cape knocking over the lamp sitting helplessly on the table. The bulb exploded onto the faux-wooden top. "Do you know what this dastardly cleaver fellow means?"

Batchick lifted her chin. "How do you know it's a fellow?"

He crossed over to her in three long steps. "Do you know who the Quizzler is? Have you information--"

"No--" Batchick swept her hand slowly down her shiny nylon boot. "I wanted to point out you were assuming the Quizzler was a fellow. And you know what happens when you assume? You make an-"

"Batchick!" Batguy grabbed her shoulder, cutting her off. "You're confusing me!"

"Do you know the answer to the Quizzler's riddle?" he asked, still clutching her shoulder.

Batguy dropped his hand, stabbing the tips of his finned glove into his thigh. He lowered his voice to a whimper, and said, "Holy tights, Batchick, just tell me."

Batchick wrapped her hands around her knee, her grin sliding into a smile. "When does a story become like a clock? When all the parts turn in sync and come together at the end in perfect timing."

"Holy plot line," Batguy shouted. "She's going to blow up the Gotham Public Library tonight! There's a reading of A TIME TO DIE by the author Jeffery Savage in person at dusk in the excessively late sequel fiction section." He ran for the doorway.

"She?" Batchick ran after him.

Batguy stopped and smiled. "Only a woman could see the irony of limiting herself in time by writing that note."

(The lights fade to black)

So, readers, timing is everything when writing a book, from the storyline, (Can you imagine writing a vampire romance story a month after Stephanie Meyer's TWILIGHT hit the best seller list?) to something as simple as the character's name. Yesterday I needed to change my favorite main character's name. It was hard. I've know Grace for over a year now, so this wasn't done lightly, but I want to make my book as marketable as possible, and if a name change might get my query letter read, then, you bet, I'll change it.

Excuse me now, I need to go find a tissue. *sniff*sob*